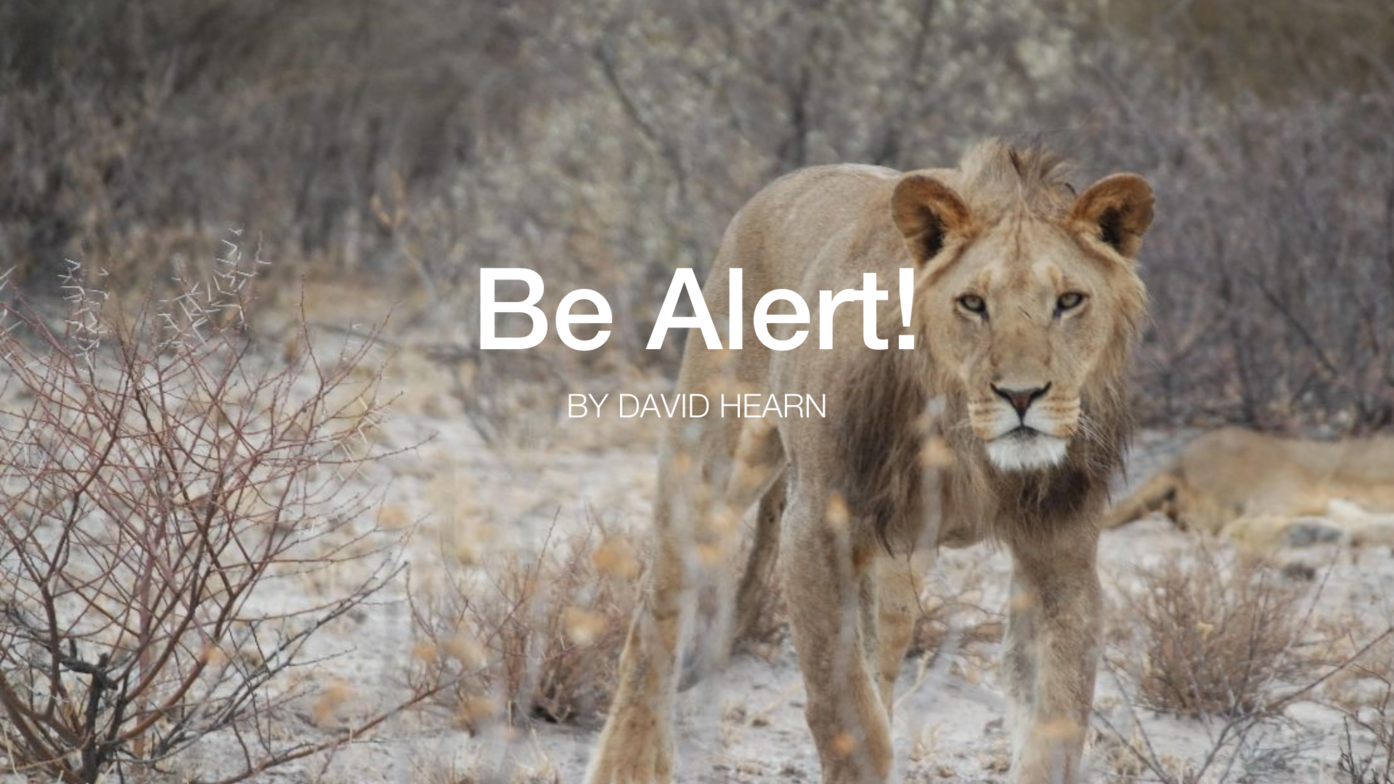 My phone went off with that unique and piercing sound that immediately caught my attention. It was an Amber Alert calling the public to open their eyes and be on the lookout for a missing child who may have been abducted. When this warning signal sounds, we all hold our breath and pray for the safe return of the child. But more importantly, we immediately become alert, watching for any clue that may help locate the child; ready to respond as quickly as possible.

The Amber Alert system serves as a powerful tool to help protect the most vulnerable, but it does so by depending on the quick and active response of each individual. I wish there was an app I could download on my phone that would serve as a Sin Alert – a warning signal that would go off when I start to head toward a place of compromise, step close to the line of disobedience, or am tempted by sin.

During this season, with so much chaos and confusion being caused by the pandemic, it is increasingly difficult to be alert. It is easy to let our guards down and be less vigilant around what we watch, what we read, and the places we allow our minds to go to. You see, sin acts like a predator. In Genesis 4:6-7, God brings a powerful warning to Cain. He declares, “If you do what is right, will you not be accepted? But if you do not do what is right, sin is crouching at the door; it desires to have you, but you must rule over it.” What an incredible depiction of sin.

Sin is like a wild beast stalking its victims, waiting in the shadows for an opportunity to pounce and devour. It reminds me of 1 Peter 5:8 where we are warned to “BE ALERT and of sober mind. Your enemy the devil prowls around like a roaring lion looking for someone to devour.”

Jesus uses the term “be alert” a number of times in the New Testament; however, one very significant reference occurs in Revelation 3, where Jesus speaks to the church at Sardis, the largest of the churches in Asia Minor. This church had advanced programs and activities, but it had become complacent and sleepy. They were going with the flow of culture rather than proclaiming the unique and distinct nature of Jesus Christ and His Kingdom. In verse 2, Jesus declares, “Wake up!”, which literally means keep on being watchful or become a person who is watchful. 1 For a city that had historically been conquered because of a failure to be watchful, this was very compelling message.

King Croesus built a massive fortification to keep the city of Sardis safe. It was designed to be impregnable. When Cyrus came against the city in 549 BC, he could not take it by frontal assault. Instead, he put the city under siege, surrounding it with his army. One night, one of Cyrus’s soldiers observed a guard standing on the wall. The guard leaned forward to look over the wall and, as he did so, his helmet fell off. The soldier watched as the guard went down a set of stairs, opened a secret door and retrieved his helmet. With one ill-considered action the guard had given Cyrus the key to taking Sardis. Cyrus sent his armies to the other side of the city and raised a fuss. King Croesus’ entire army went to that side of the city to meet them. Meanwhile, a team of special forces from Cyrus’ army entered the city through the secret door and took Sardis. Just when they thought they were safe, they were not!2

All of us have places where we are vulnerable. Remember, “sin is crouching at the door; it desires to have you, but you must rule over it” (Gen 4:7b). While there is no such thing as a Sin Alert app that we can download on our phone, we don’t need one. We have something more effective – all those in Christ have the Holy Spirit living within them. He brings strong warnings and cautions. He is that unique and piercing sound that catches our attention to alert us that an invasion is on the horizon; to remind us not to lean over the wall. His call is a call to holiness – to a full surrender to Christ and a renewed focus on His mission – being His representatives to a lost and hurting world.

Some of the saddest conversations I have had are with believers who made decisions that opened the door for the wrecking ball of Satan to destroy their lives. Often I hear the same lament, “I never saw it coming!” But it was one small compromise at a time that led them there, often accompanied by a season of crisis or pain. We all need to ask ourselves: “Where am I most vulnerable to compromise?” and “Where have I begun to be careless in my thoughts or behaviours?”

A.B. Simpson, the founder of the Alliance, said, “This is our high calling, to represent Christ, and act in His behalf, and in His character and spirit, under all circumstances and toward all men.”3 Living in a long-term crisis can be exhausting and the temptation toward spiritual drowsiness is high. Now more than ever, we must remain vigilant or we can end up invaded by sin.

Take a moment and ask the Holy Spirit to speak to you. Do you hear the Holy Spirit sending you an alert, saying, “Stop, turn around, or run?”  Perhaps it is a Sin Alert identifying an area of your life where you are leaning over the wall just a bit too far. Maybe it’s like an Amber Alert calling you to be alert and on guard for someone else. Have you responded?